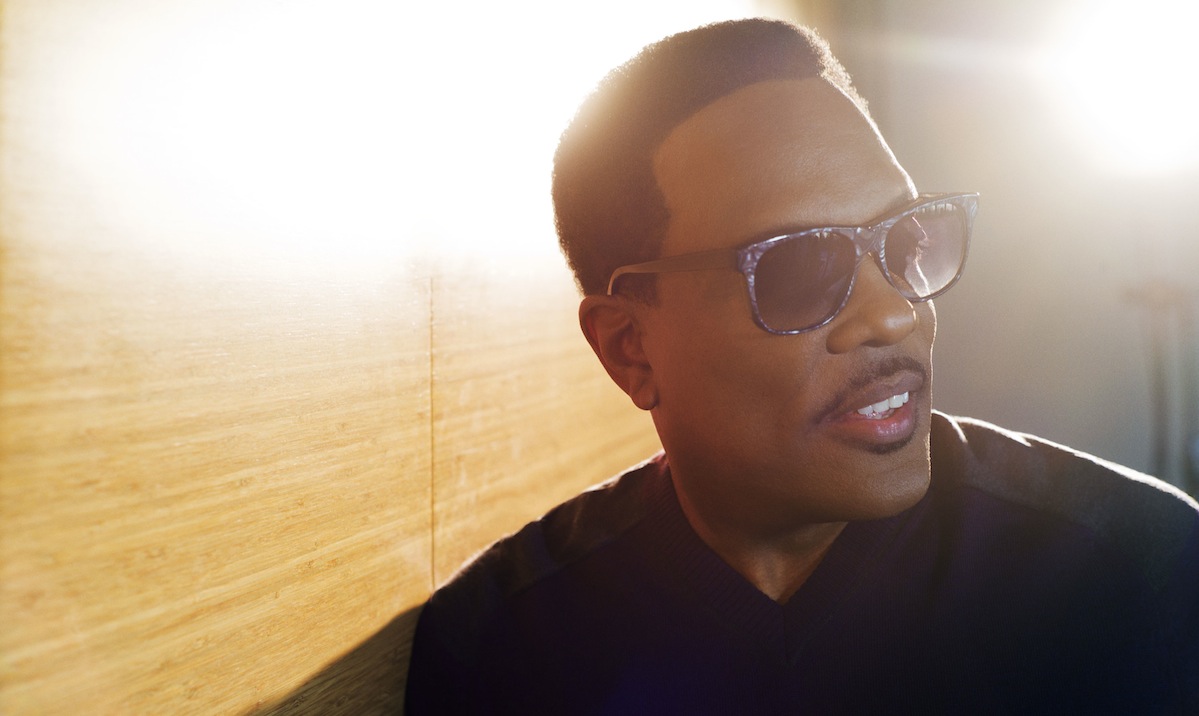 Nine-time Grammy nominee. Showman extraordinaire. Hit-making singer/songwriter whose second act is trumping his legendary first run. Not many contemporary artists can lay claim to such superlatives. Charlie Wilson can.

And Charlie Wilson, co-founder of iconic funk trio the Gap Band, has no intentions of slowing down. He wrapped 2014 with two Grammy nominations—Best Rap/Sung Collaboration and Best Rap Song—for his singing and songwriting contributions to Kanye West’s “Bound 2.” Arriving on the heels of that news: the announcement of Wilson’s eight-week “Forever Charlie” national arena tour, kicking off February 12.

“It’s going to be an amazing—and sexy—tour for sure,” promises Wilson, who will be joined by special guests Kem and Joe. “I call it young, grown and sexy.”

Then just a few weeks before P Music Group/RCA’s Jan. 27 release of his sixth solo album, also titled Forever Charlie, Wilson locked in yet another hit with lead single, “Goodnight Kisses.” Already a top 10 single, the record rings up a grand total of 18 hits thus far on a tally that also includes eight No. 1s, among them “My Love Is All I Have,” “You Are,” “Without You” and “There Goes My Baby.”

So what’s the secret behind Wilson’s ongoing contemporary foothold? Start with emotion-packed, full-bodied tenor vocals and real-life lyrics that soar above the formulaic, auto-tuned clutter that dictates most of popular music. As Billboard related in its review of “Goodnight Kisses”: “Over snap-and-swing doo-wop-inspired production, the Gap Band co-founder sings sweetly about his loved one’s smooches. At 61 years old, Wilson is still as convincing a romantic as ever.”

Another standout track on Forever Charlie’s romance front is the jubilant love anthem “Touched by an Angel.” But love songs aren’t Wilson’s sole forte as he showcases to full effect on the 12-track set. In a nod to the solid funk that he laid down with the Gap Band, Wilson reveals more of his up-tempo persona this time. “I wanted to try some other things for fun, to relive some of the Gap Band moments,” he explains. “I wanted to create something funky, a retro feel but with new flavor to it.”

One example is the percolating, can’t-sit-still track “Infectious” featuring Snoop Dogg. Shaggy, yet another of Wilson’s “famous nephews,” hops on board the reggae-flavored “Unforgettable.” Packing heat reminiscent of the Gap Band’s No. 1 classic “Burn Rubber” is the Wilson-composed “Sugar. Honey. Ice. Tea.” Then there’s “Hey Lover.” It immediately grabs attention with its naughty-but-nice hook: “Hey lover … / Let’s go undercover /and break each other off a little bit of love tonight.”

The smooth up-tempo concoction is the handiwork of the Grammy-winning songwriting/production team Jimmy Jam & Terry Lewis. In fact, this marks Wilson’s first-time collaboration with the legendary duo. The trio’s hot musical rapport also sparked two more Forever Charlie songs, the electro-funked “Things You Do” and the ethereal, alt-R&B mid-tempo romp “Me and You Forever.”

“I’m so happy to have finally done some records with them,” says Wilson of his wish-list collaboration with Jam & Lewis. “I’ve always wanted to record with them, going back to the Gap Band days. We just didn’t get the chance then. But this time I got to get it all out with them. We had so much fun.”

In addition to Jam & Lewis, Wilson’s Forever Charlie collaborators include longtime P Music Group songwriting/production colleague Gregg Pagani. He helmed five tracks on the set: the head-bobbing groove “Just Like Summertime,” feel-good love song “My Favorite Part of You” and dance jam “Birthday Dress” in addition to “Touched by an Angel” and “Sugar. Honey. Ice. Tea.” Also part of the creative mix is another longtime associate: Emile Ghantous. One of the writers of lead single “Goodnight Kisses,” Ghantous—in tandem with Steve Daly and Keith Hetrick—comprises the new P Music songwriting/production team Cartoons. That team is responsible for the album’s rousing opener “Somebody Loves You” as well as the aforementioned “Infectious” featuring Snoop Dogg and “Unforgettable” featuring Shaggy.

Of course, you can’t talk about Wilson’s staying power without referencing his explosive live show. Averaging 50-60 concerts a year, the indefatigable performer has become a must-see, can’t-top staple at the annual Essence Festival. He counts a total of eight performances there so far, six of which have been consecutive to date. And that’s not counting repeat headlining stints at other major urban festivals: Macy’s Music Festival, Hampton Jazz, San Diego Music Festival, Las Vegas Music Festival and the Arizona Jazz Festival.

And who can forget the roof-raising lifetime achievement tribute to Wilson at the BET Awards in 2013. The star-studded performance, featuring Justin Timberlake, Pharrell Williams, Stevie Wonder, Snoop Dogg and Jamie Foxx, remains one of the annual awards show’s singular, top-rated moments.

The monumental respect that Wilson garners from peers and fans alike is a testament to the creative, performing and survival skills he honed during his initial career heyday with the Gap Band. Raised by a minister father and mother, the Tulsa, Oklahoma native was a founding member of the pivotal R&B/funk trio, which hit the charts running in the late ‘70s and ‘80s with a string of hits including “Outstanding, “You Dropped a Bomb on Me,” “Yearning For Your Love,” “Early in the Morning” and “All of My Love.” The group retired in 2010.

Working through the lows of drug and alcohol addiction—and sober now for 20 years—a formerly homeless Wilson signed to Jive (folded into RCA in 2012) in 2004 after landing his first No. 1 Billboard Urban AC hit in 2000, “Without You.” His gold-certified Jive debut, 2005’s Charlie Last Name Wilson, yielded a top 15 R&B single via the title track. Uncle Charlie arrived in 2009, securing two Grammy nominations: Best R&B Album and Best Male R&B Vocal Performance for the hit single “There Goes My Baby.” A year later, Wilson stepped back up to the plate with Just Charlie and his biggest hit to date, “You Are.” Spending 13 consecutive weeks at No. 1, the song scored Grammy nods for Best R&B Song and Best R&B Performance. That was followed in 2013 by Love, Charlie, which spun off the hit “My Love Is All I Have.”

“Looking back, I wouldn’t have believed I’d be where I am right now,” says Wilson. “That’s why I shout every night at my concerts because I thank God for allowing me to be here.”

Wilson gives back just as hard offstage. Now in remission following a bout with prostate cancer, he became a spokesperson for the Prostate Cancer Foundation in 2008 to promote awareness and educate the male community about a disease that afflicts one in six American men and one in three African-American men. Most recently, Wilson participated in the “Stand Up 2 Cancer” telethon in 2014.

Throughout his long-running career, Wilson has stayed true to who he is musically and creatively while simultaneously raising the bar each time. His creative relationship with close friend Snoop Dogg has morphed into collaborations with such contemporary hitmakers as Justin Timberlake, Pharrell and Kanye West. In addition to his nine Grammy nominations, the 2009 Soul Train Icon Award and the BET Awards’ 2013 Lifetime Achievement Award, Wilson is a 2005 BMI Icon Award honoree, was named Billboard’s No. 1 Adult Artist in 2009 and received the Trumpet Foundation’s Lifetime Achievement Award in 2013. In 2014 Wilson earned yet another Grammy nomination for “If I Believe” in the Best Gospel Song category.

Wilson will chronicle his odds-defying life and career in a long-anticipated biography due out on June 30, 2015. In the meantime, he’s focused on bringing his heart and soul back to the forefront with Forever Charlie. “If you just want to hug up on your girl, I’ve got those records,” he declares with a laugh. “And if you want to dance, those records are there too. That’s why I call it Forever Charlie—because I’m not ever going anywhere.”